The view from Dale’s apartment in the day… 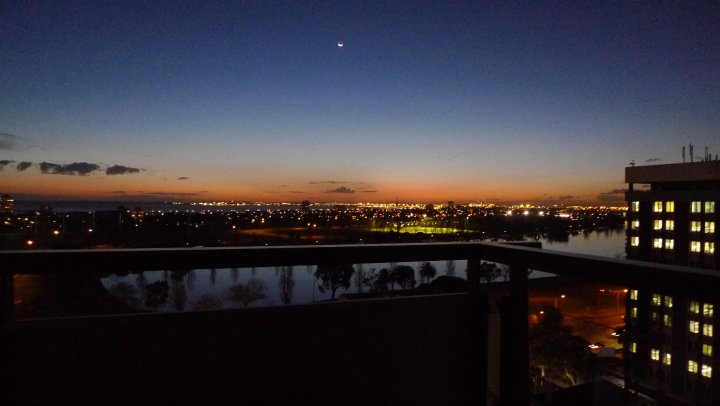 Forget the neat-and-minimalistic look of bachelor pads in movies; this is how it looks like.

The room that Cassey and I shared.

Filling the fridge with the things that matter the most – beer! Incidentally, it was so cold that even though we put some food/groceries out in the open, the food didn’t go bad because of the temperature.

Pretending to be a ninja assassin as the host prepared dinner for us. 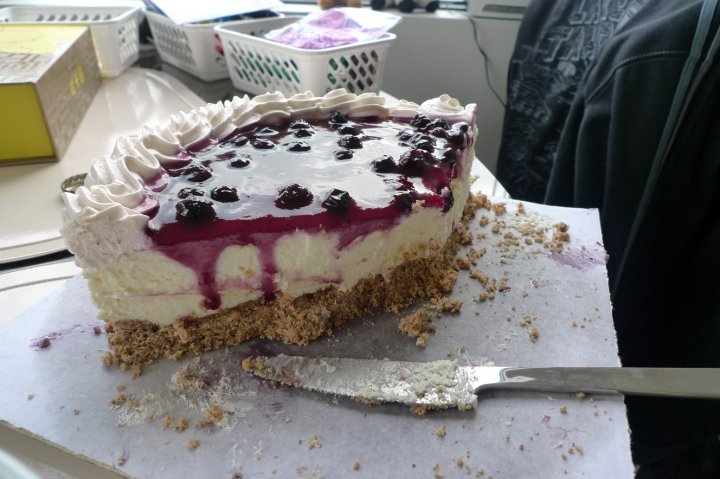 The best cheesecake in the world, seriously. Leftover from Dale’s surprise birthday party.

Headed to Mekong Vietnam for the best pho I have ever tasted. I was craving for the noodles when I was back in Singapore. Unfortunately Bless and gang told me about the ‘human protein’ rumor circulating about this store and that has seriously turned my stomach. 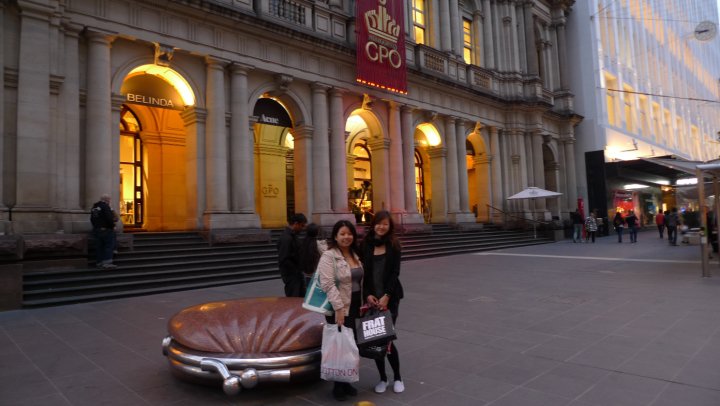 Here’s me and Cassey doing our touristy thing. We headed to the factory outlet stores earlier and that’s why we had bags with us. It was about 530-6pm and the sky was already turning dark.

After the macarons, we headed to this Sichuan restaurant where every dish is literally marinated in chilli, cooked in chilli, sprinkled with chilli, dusted with chilli, and served with liberal doses of chilli. Just look at that! That’s fish in chilli oil or something.

This would either make your mouth water in anticipation, or if you are not a chilli fan, your tastebuds wither and die.

After dinner, headed to meet Dale’s friends at this pub with chocolate beer! Not a fan of the chocolate beer, but they do have this cherry beer that is absolutely delicious. While we were there, this group of hilarious strangers joined in our conversation and ended up taking this photo for us. I love Melbourne – the people there are really quite friendly. 🙂

Part of Melbourne’s appeal – it’s so cold so you layer up and dress up, unlike in Singapore where we balk at anything other than cotton. The people in Melbourne are far better dressed than people in Singapore.

Camberwell is an amazing place to get bargains. I got a leather-and-fur jacket for $15 and a clutch for.. get this, 50cents!

After shopping, headed to Sofia’s for pasta lunch. This is Gladys, who’s ashamed to be next to me.

Their servings are really big. Check this 3-in-1 pasta dish out!

This is awesome garlic bread!

Walking towards the Crown Casino. Check out the reflected clouds on the building’s facade! I won $20 bucks at the casino btw. hahaha

Sunday. Headed to this place called Mart’s for breakfast. They have really good scrambled eggs and toast.

Cassey left on her flight back to Brisbane. =( Dale went to class. So I went to Chapel Street to do some shopping, and Maria came to accompany me.

I was walking past this shop when I saw that there were two cat plush toys in the window. Then one of the plush toy blinked and I realised they were real cats! Sooooooooooo cute! After four days of being in Australia, I was convinced that there weren’t any cats around. But here you go! A pretty cat tanning in the sun, in the warmth of a shop window. 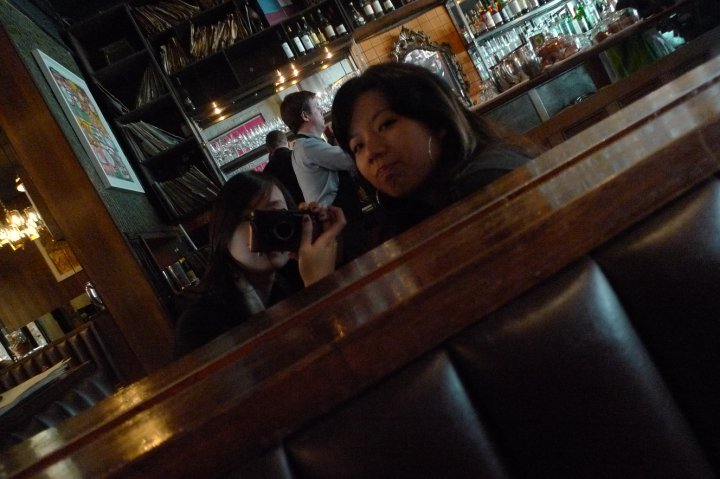 Maria and I eating lunch at a cafe on Chapel Street. Soup, main dish and wine all for AUD20. 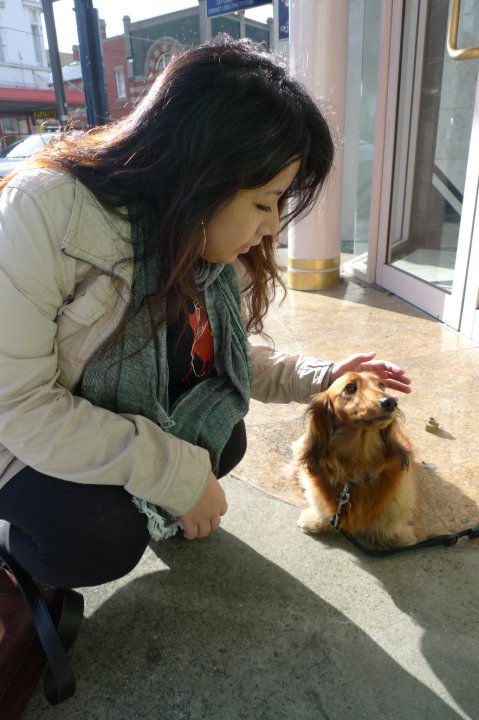 So cute! This little sausage dog was tied to a lamp post outside a building.

After Chapel Street, headed to meet Denise at Flinder’s as she ended class already.

Lord of the Fries! I tried the Belgium sauce.

There was this busker playing really good music at the station so I went over to drop a coin into his guitar case. When he saw my fries he was like, “Hey! Give me two, will ya?” so I offered my fries to him. Then he said, “Thanks… it’s one fry for me, and one for my dog.” So cute. 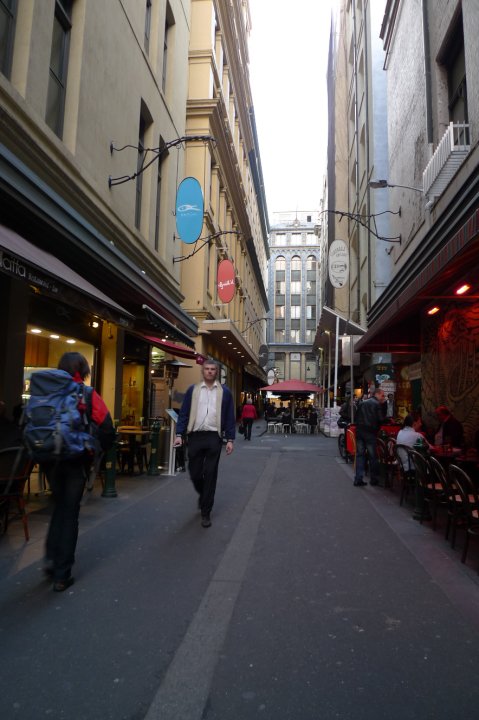 Degraves Street, a row of pretty and quaint cafes. Maria say it’s like a Harry Potter street, which I agree. 😀

After dinner at Es Teler, we went to an Irish pub for some beer. It was pretty quiet at first when we went in, but as the night progressed the pub got progressively rowdier.

Drink up! PS: That nasi goreng you see on the plate isn’t the food they provide! Basically what happened was that we wanted a second order of chicken Parmesan (Gladys and I ate most of the first) but they told us the kitchen was closed. So we opened our takeaway nasi goreng from our dinner earlier and dumped it on the plate. 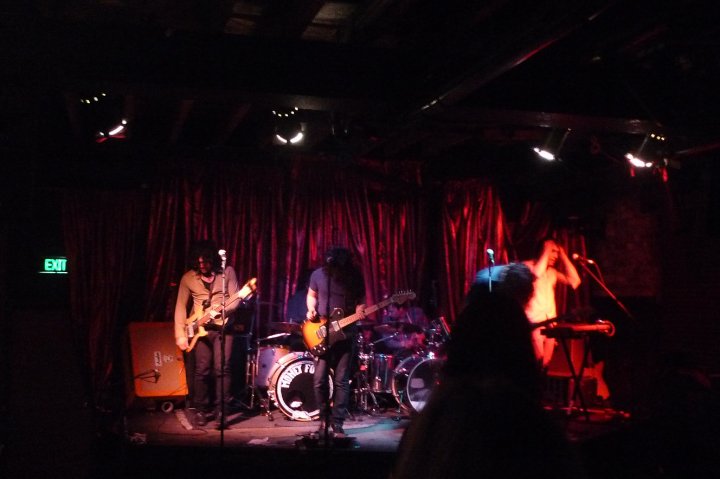 The next two days was spent on the Great Ocean Road, which I would post up in another entry. After I returned to Melbourne after a butt-numbing and nerve-wrecking 3 hour car ride on roads in total darkness, we headed to ACDC lane where this really good band was playing. The keyboardist looked like Brandon Routh.

My last day in Melbourne. Went to Max Brenner for some good old chocolate.

Headed to Pad Thai for some spicy food. I could NOT FINISH THAT ABOVE, it was so spicy it gave me a headache. 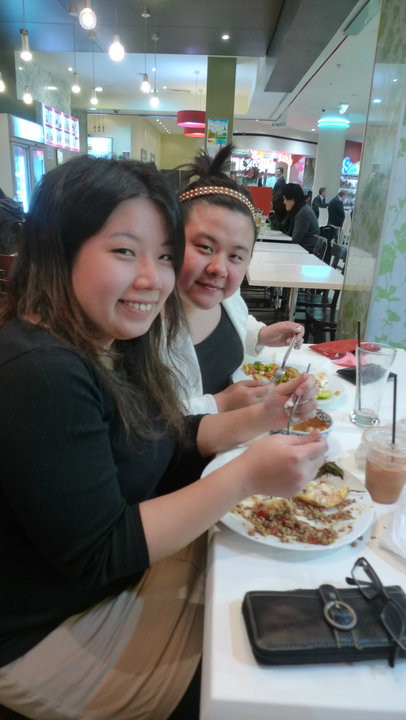 Me and Blessann eating our food.

After that, headed back to Dale’s place to kill time and drink up. Look at the clouds! So pretty.

And there ended my trip to Melbourne.